Due to the new roadway configurations around the Four States Fairgrounds the Texarkana Arkansas Police Department has released details for traffic with the “Sparks in the Park” event.

Saturday, June 25th, is the annual “Sparks in the Park” event which will be held at the Four States Fairgrounds.  Over 30,000 people are expected to attend the event. Due to the new roadway configuration around the Four States Fairgrounds, The Texarkana Arkansas Police Department would like to inform all patrons of the upcoming traffic plans in order to make everyone experience as pleasant as possible. All drivers and patrons are reminded that Police Officers will be working traffic on city streets and highways so please be attentive to their instructions for their safety and yours. Speed limits on Four States Parkway have been reduced.

Vehicles may ENTER the Fairgrounds parking area the following ways:

The Four States Fair will provide personnel to direct vehicles on where to park once they have entered the parking areas around the fairgrounds.

Vehicles may EXIT the parking areas and fairgrounds the following ways:

Additionally, it is recommended for all patrons to arrive as early as possible to ensure that you will arrive in time to see the display.  Again, all drivers need to be attentive to officers working on the roadway directing traffic and expect delays due to excessive amounts of vehicle traffic after 8:30pm.  All traffic laws and parking will be strictly enforced. No one will be allowed to illegally park vehicles on city streets and roadways.  Illegally parked vehicles will be towed at the owner’s expense. Any Vehicle parked improperly inside the park area may be blocked in by other vehicles and will not be able to exit until the end of the event. TAPD encourages everyone NOT to park in the in the park area and to use the designated parking areas only. 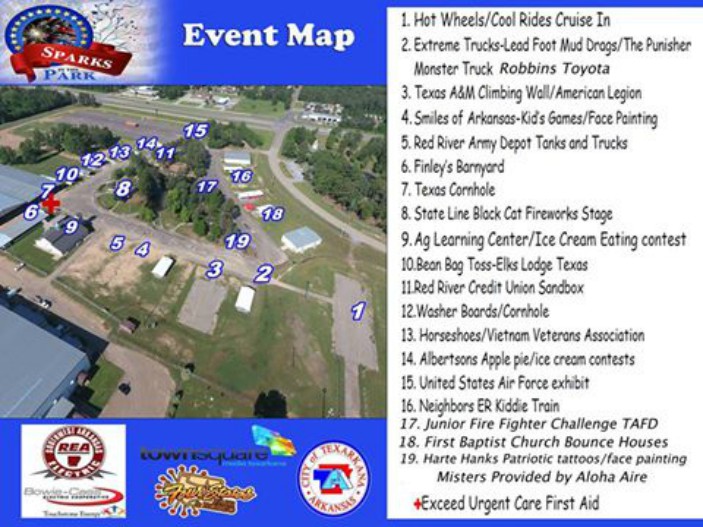