The Texarkana Arkansas Police Department will be out in force over the Memorial Day holiday weekend enforcing all traffic laws with extra attention to seatbelt use. ‘Click it or Ticket’ is a national seat belt campaign and will take place May 22 through June 4.

As summer kicks off and families hit the road for vacations, the Texarkana Arkansas Police Department is reminding motorists to Click It or Ticket. Aimed at enforcing seat belt use to help keep you and your family safe, the national seat belt campaign will take place May 22 through June 4, concurrent with one of the busiest travel and holiday weekends of the year.

“Our law enforcement personnel see firsthand the loss of life when people refuse to buckle up,” said Texarkana Arkansas Police Sergeant Les Hunter. “It’s such a simple thing, and it should be an automatic next step after sitting down in a vehicle.” As the Memorial Day weekend approaches and the summer vacation season ramps up, “We want to keep our community members safe, and make sure people are doing the one thing that can save them in a crash: buckling up. If the enforcement crackdown wakes people up to the dangers of unrestrained driving and gets them to buckle up, we’ll consider it a success.”

Sergeant Les Hunter asked you to help spread this life-saving message before one more friend or family member is killed as a result of this senseless inaction. Seat belts save lives and everyone – front seat and back, child and adult – needs to remember to buckle up, every trip, every time.

Officers with the Texarkana Arkansas Police Department will be out patrol the area for violators not wearing their seat belts during this time and will stop those who are not following the Arkansas State law.

For more information on the Click It or Ticket mobilization, please visit www.nhtsa.gov/ciot. 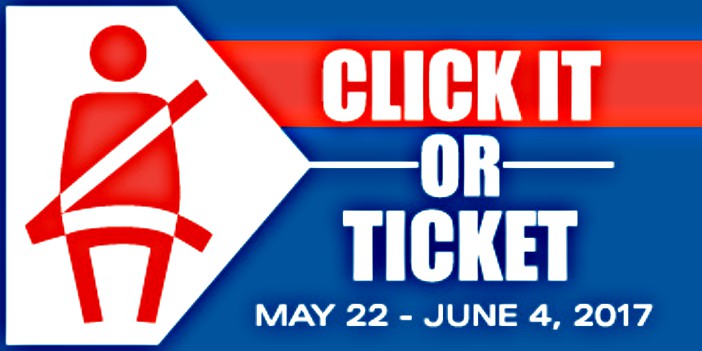