A Texarkana man has been arrested by Texarkana Texas Police after attempting to steal a motorcycle from the Starbucks parking lot on North Stateline Avenue, and other outstanding warrants.

The Texarkana Texas Police Department arrested Jasyn Alexander, 39, of Texarkana Arkansas, after he tried to steal a scooter at the Starbucks on North Stateline Avenue on June 24. 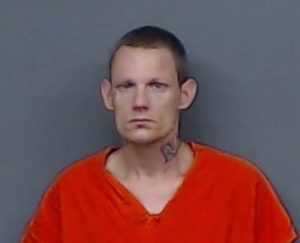 A Deputy US Marshal observed Alexander enter the Starbucks parking lot and attempt to load a scooter into the bed of a truck.  When the scooter’s alarm went off, Alexander quickly abandoned his efforts and left.  The Marshal followed the truck as it travelled on Texas Boulevard and notified the Texarkana Police Communications Center.  Alexander was stopped in the 4300 block of Olive Street.  Officers immediately recognized Alexander as the suspect of several recent thefts and knew that he had an outstanding warrant for Aggravated Robbery.  He was immediately arrested without incident.  Officers found used syringes and a substance believed to methamphetamine in the bed of the truck.  They also found several new items with price tags still attached that matched items reported stolen from Texarkana businesses over the last week.  Alexander had Social Security cards and a driver’s license in his possession that belonged to other people.  Officers also discovered that the license plate on the vehicle was fictitious and that the truck had been reported stolen in Miller County Arkansas.

Additional charges against Alexander are possible as detectives continue to investigate.