There have been a number of sightings recently of Black Bears in the Northeast Texas area, including locally. The Texas Parks & Wildlife Department is advising residents and hunters of what they need to know about Black Bears and the law in Texas.

Black Bears are no strangers to rural residents and hunters in Arkansas. Just a few years back even a black bear was captured inside the city limits of Texarkana Arkansas. Now more and more sightings are occurring in Northeast Texas and hunters need to be bear aware.

At least four sightings have been documented on game trail cameras between June and late August in Bowie, Red River and Smith counties. Wildlife biologists with the Texas Parks and Wildlife Department (TPWD) confirmed the sightings and speculate the bears, which appear to be young males, are looking to establish their own new home ranges and likely dispersed from Oklahoma or Arkansas where bear numbers have increased in recent years.

This is the first confirmed presence of black bears in East Texas since September 2011. Breeding black bear populations have been absent from this region for almost 100 years, but bears from Oklahoma, Arkansas and Louisiana occasionally wander into East Texas.

“Once these bears figure out there’s no opportunity for companionship over here they will likely retreat,” says Dave Holdermann, a non-game wildlife biologist with TPWD in Tyler.

Holdermann said as hunters in this area head to the field in preparation for deer season, some might see signs of bears attempting to enter camps where food is kept or wildlife feeders overturned. Bears eat mostly plant material and that’s probably their greatest source of protein; for example, seeds, acorns, nuts and even herbage has protein.

According to Holdermann, bears are normally shy and not aggressive to humans. But if a bear regularly visits a ranch or deer stand, people should try to scare it with rocks, a slingshot or air horn.

“If people encounter a bear at close range, they should talk calmly while backing away slowly. Don’t make direct eye contact, and don’t run away,” he advised. “If a bear approaches you, stand your ground and raise your arms, backpack or jacket to appear larger and yell at the bear to scare it off.”

Hunters are encouraged to study their game carefully to avoid mistaking a bear for a feral hog or other legal game animal. It is against the law to kill a black bear in Texas, with penalties of up to $10,000, added civil restitution fines, jail time and loss of all hunting privileges. The black bear, Ursus americanus, is listed as threatened by the State of Texas.

To minimize encounters with bears, hunters should keep camps clean to prevent odors that will attract bears and discard gut piles far from campsites. Placing deer corn in piles or in open feeders will attract more bears, while using an automated feeder hung out of reach of bears will decrease bear visits. Also, switching bait from corn to soybeans will reduce bear activity. And, planting food plots is the best way to attract deer and avoid bear visits.

More information about black bears in Texas, including safety tips, is available online at tpwd.texas.gov/huntwild/hunt/resources/bear_safety/. Anyone observing black bears in East Texas is urged to contact Holdermann at 903-566-1626 ext. 209 so wildlife experts can track trends in black bear populations and distributions. 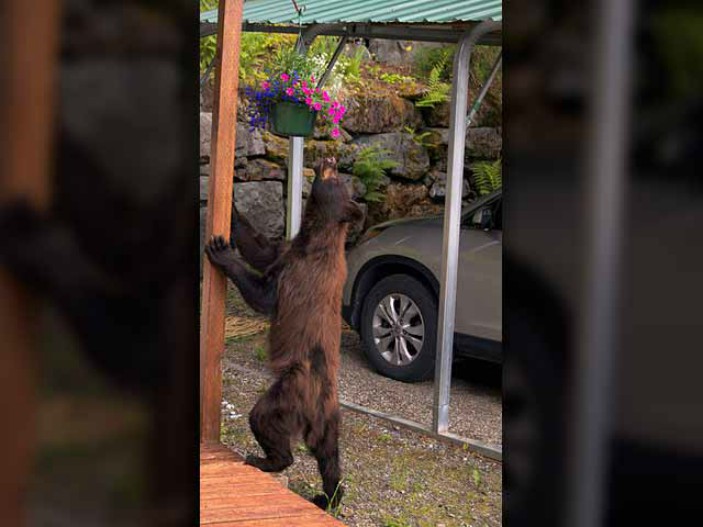 10 FACTS TO KNOW ABOUT BEARS