Tri-State Iron & Metal Inc. played a key role in the recent prosecution of a theft case where Jason Allen Autrey pled guilty to theft of government property and was sentenced to 30 months in federal prison for stealing from Red River Army Depot. TAPD says that the people at Tri-state are key contributors of putting metal thieves behind bars.

Tri-State Iron & Metal Co. played a key role in assisting investigators solve the theft of government property from the Red River Army Depot last year. Jason Allen Autrey recently pled guilty to theft of government property and was sentenced to 30 months in federal prison.  As a result of the cooperation and the diligent record-keeping of TSIMCO, authorities were able to readily identify Autrey as the thief who sold the vehicle parts as scrap metal.

“As a company we take metals theft very seriously.  While we were able to return the stolen property to Red River Army Depot, Tri-State was not able to recoup the $20,000 paid out to Autrey.  This incident resulted in a significant financial loss to our company,” said Howard Glick, president of Tri-State Iron & Metal Co.

Tri-State has worked closely with legislators and law enforcement to combat metals theft under Ark. Code Ann. § 17-44-102, which requires all Arkansas metal recyclers to get documentation of ownership and maintain transaction records which are uploaded to an online database, LeadsOnLine. This database was not only instrumental in this metal theft prosecution, but in many others locally and nationally.

“Tri-State was the first local scrap metal business to begin entering all scrap ferrous and non-ferrous metal transactions into an on line search database for law enforcement known as ‘LeadsOnLine.’ LeadsOnLine provides instant police access to personal transaction data and photographs of the scrap metal in question. Tri-State cooperates with all local law enforcement in watching for and identifying potentially stolen property when such information is brought to their attention. They are key contributors of putting metal thieves behind bars and we appreciate their efforts,” said Captain Jordan.

Glick said that while this was an unusual situation, the company is constantly on the lookout for scrap metal transactions dealing with stolen property.  “We are dedicated to stopping metals theft as it damages our community and tarnishes our industry.  While we are often able to return the stolen property to the rightful owner, we are almost never able to recovery any money paid out to metal thieves.”

Tri-State has been operating in Texarkana since 1947.  They employee over 100 employees and divert over 200 million of pounds of metal from landfills each year. Tri-State Iron & Metal Co. is located at 1725 E. 9th St. in Texarkana, Ark. The company’s website is www.tsimco.com. 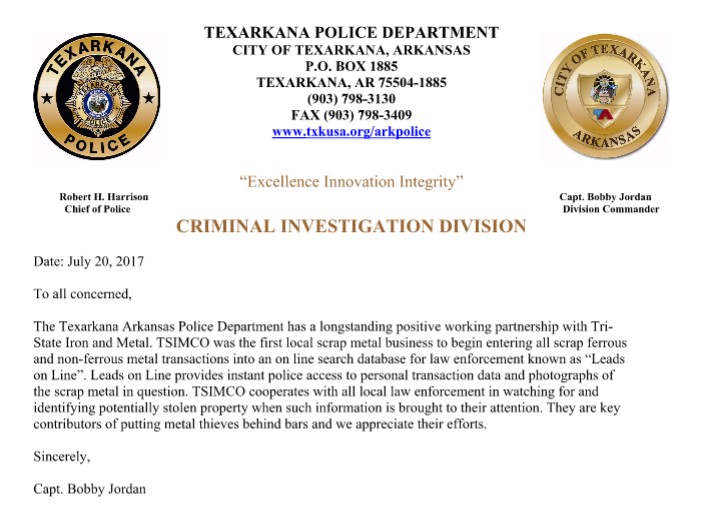