Big changes could take place for Liberty Eylau Schools with a ‘yes’ vote in the upcoming 2016 bond election. Changes that include a construction project for a new 1-4 primary campus and the closing of the C.K. Bender Elementary Campus.

Voters will decide on 2 bond proposals in the 2016 Bond election.

Proposition 1 is a 19.9 million dollar project that will convert the L.E. Pre-K to grade 1 campus on Hwy. 59 into the Liberty Eylau Primary 1 – 4 Campus and see the closing of the old C,K. Bender Elementary School on Buchanan Road for a savings estimated at $430,000 per year.

Proposition 2 would be a project that would total $985,000 and mean some much needed improvements to Harris Field at the High School Campus. Including new turf for the football field, resurfacing of the track, and improvements to the concession area and restrooms.

The proposals in this bond are presented in response to comprehensive needs assessments performed by LEISD administration, the school board, and outside consultants. The Board of Trustees, along with an administrative committee has spent more than 1.5 years studying the district’s current facilities, and financial data. In addition, extensive discussions were held with the district’s financial advisor, architect and bond counsel.

A series of community meetings have been scheduled to make sure the public is fully informed on all aspects of the upcoming vote, with more meetings to be scheduled. For specific questions you can email to bond@leisd.net and they will be added to the district’s website. Supporters of the bond proposals have a Facebook Page to help educate the community with the details of the propositions. 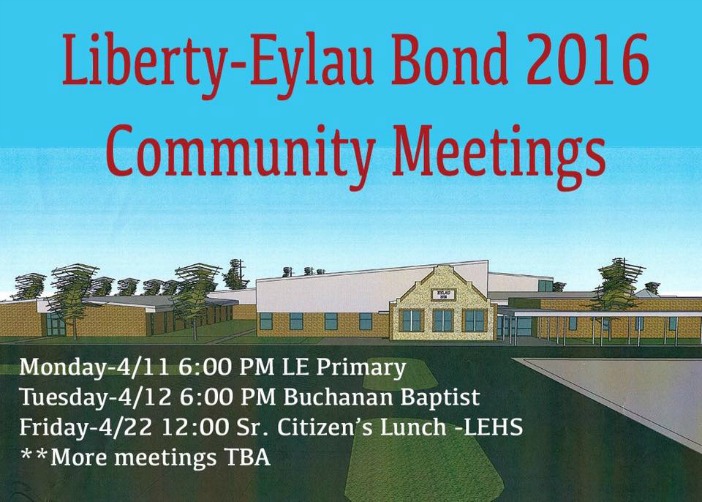 For a complete break-down of tax information, including the data that show how much lower Liberty Eylau’s school property taxes are than neighboring districts see the L.E.I.S.D. Website.