The Texarkana Arkansas District Court and the T.A.P.D will conduct a car seat exchange warrant amnesty period running from May 15th through May 26th, 2017. This could save someone a minimum of a  $350 warrant fee!

Currently, Texarkana Arkansas Police Officers locate many drivers who do not provide proper car seats for their children. 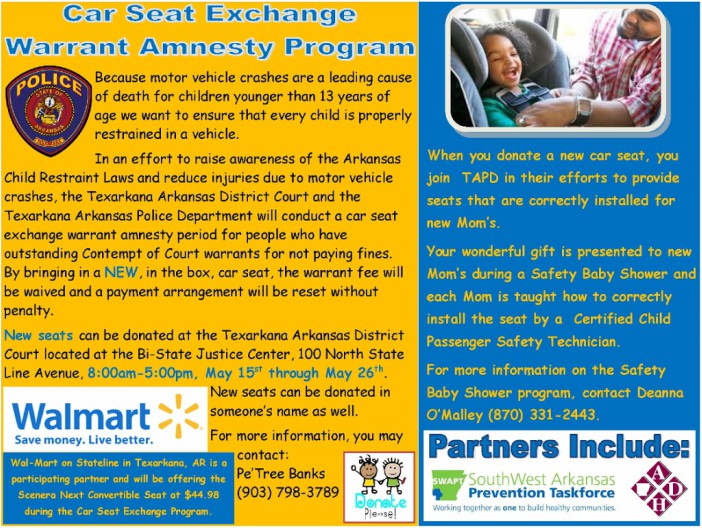 Because motor vehicle crashes are a leading cause of death for children younger than 13 years of age we want to ensure that every child is properly restrained in a vehicle.  In an effort to raise awareness of the Arkansas Child Restraint Laws and reduce injuries due to motor vehicle crashes, the Texarkana Arkansas District Court and the Texarkana Arkansas Police Department will conduct a car seat exchange warrant amnesty period beginning May 15th through May 26th, 2017 for people who have outstanding warrants for Contempt of court for not paying fines.  By bringing in a NEW, in the box, car seat, the Texarkana Arkansas District court and the TAPD has agreed to waive the warrant fee and reset a payment arrangement without penalty.

The upcoming car seat exchange warrant amnesty period was announced today by District Court Judge Wren Autrey, who said the amnesty program would enable those being sought on warrants to avoid being arrested, avoid being assessed additional court costs and resolve their case entirely.  Judge Wren Autrey said, “These individuals have had their driving privilege suspended and clearing these fines will also enable them to regain a valid driver’s license”.  Judge Wren Autrey will waive the $350.00 warrant fee and release your driver’s license for reinstatement.

Pe’Tree Banks TAPD Dockets Coordinator says, “Many individuals in Texarkana, Arkansas unfortunately have outstanding warrants that could benefit from this.  Instead of being locked up in jail away from your families, bring in a car seat.  You will not only help yourself, but you will also be contributing to the safety of a child in this community.”

The seats can be donated at the Texarkana Arkansas Police Department located at the Bi-State Justice Center, 100 North State Line Avenue, 8:00am-5:00pm, beginning May 15th through May 26th, 2017. Thank you in advance.

The program will now officially kick-off on Thursday, May 11. Officer Kristi Bennett with TAPD said,

TAPD will be kicking this off at the Car Seat Safety Checkpoint this Thursday, May 11th from 12-6pm in the parking lot of CVS.  Anyone can come by and have their car seat inspected by a certified car seat installer completely free!!!! 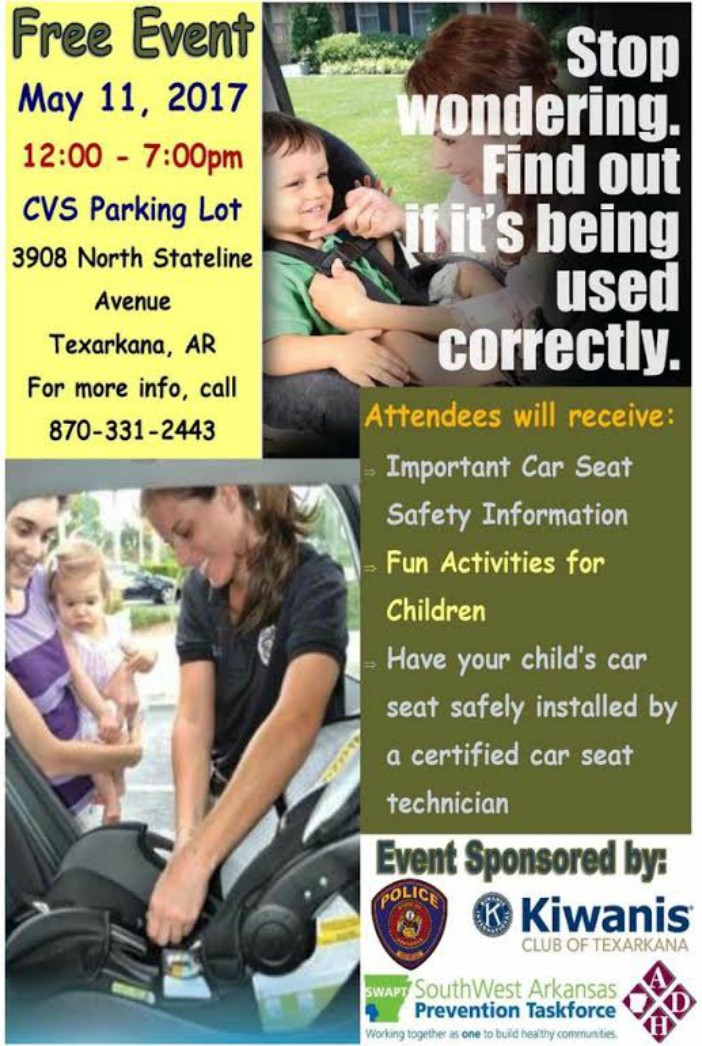