Here is a post that is a little bit of information with a little opinion mixed into it regarding the 2022 American Freedom Convoy stop planned for Texarkana, the problems the convoy had today, and a very short video.

As we get more details, I feel like you should know…

The Convoy was scheduled to arrive at the Circle J Cowboy Church in Texarkana at exit 26 on I-49 south of town at 2:00 pm. At 2 they were still in Little Rock. So here at the get-go, this is some opinion, this morning the convoy left out of OKC and made a stop in Little Rock. NEVER STOP IN LITTLE ROCK. I do not have all of the details at the time of this post, but in the parking lot where the convoy stopped in Little Rock, there was a homicide. Of course, with murder comes the caution tape and investigation with it. The convoy was penned in. While stranded a decision was made to split the convoy up with half heading to Memphis. When they were able to finally get on the road from Little Rock the group got onto I-30 west, well, it was I-30 west in Little Rock so that means delays. 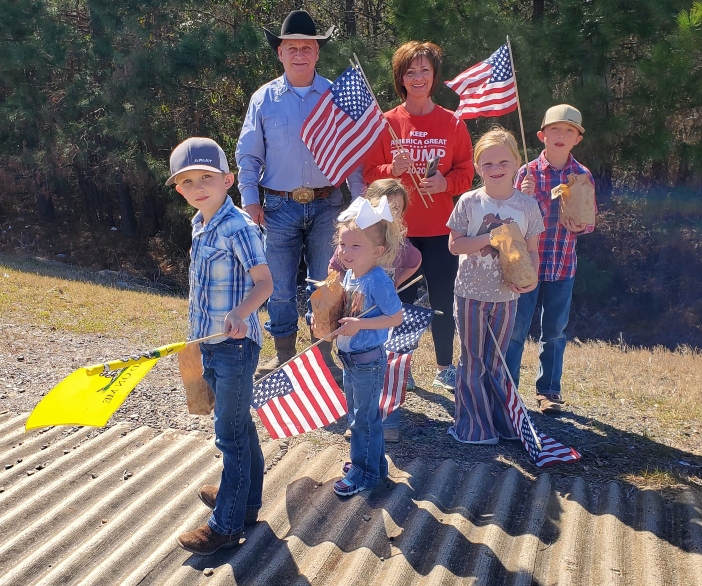 The lead trucks of the convoy running without trailers were able to make it to Texarkana a little after 4:00 pm… so, it was a “little convoy” when they arrived here. We spoke with Melissa Courtney, a volunteer in Tennessee working on logistics, she said, “I don’t know what else to call it but sabotage. We’ve had multiple vehicles trying to break up the trucks or harass the drivers making everything unsafe between Oklahoma City and Little Rock. We should have kept the routes secret, but wanted everybody to be able to be involved.” Ms. Courtney went on to share, “After the delays and problems in Little Rock, part of the convoy went on towards Memphis to make their way to Washington D.C.” She told me about more of the craziness the group has had to deal with as a whole, and I believe all of it, and I’ll tell you why in a second. 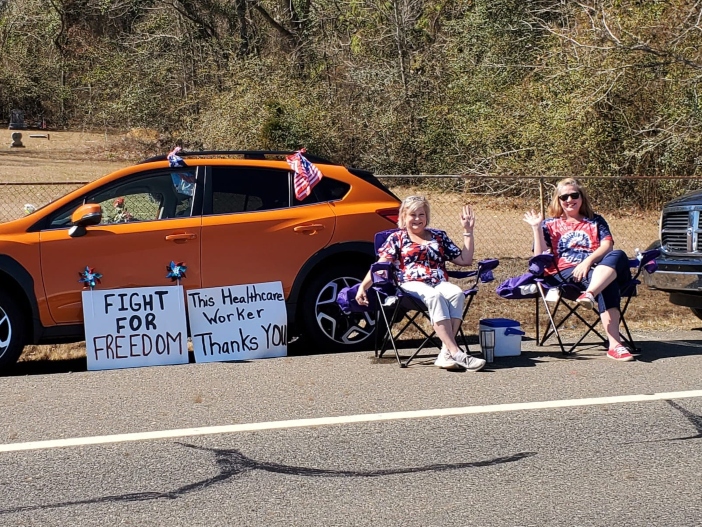 The truckers that did make it to Texarkana were welcomed by at least 1,000 folks at and around the Circle J Cowboy Church waving American Flags and banners. At the church, they were cheered, fed, thanked, and able to take a breath and wait for the rest to trickle in or through to decide what to do with the routes going forward… with advice to keep the schedule secret and just all meet up in Washington, but I am just a bystander.

They were still in Texarkana at 7:00 pm working on routes to go on to Washington D.C. to present legislation and make statements regarding rights that were abused over the last couple of years, and are clearly at risk in the future. They would like to ensure that the mistakes made from the pandemic and poor reasoning of government mandates during the pandemic don’t happen again, no matter who is in the Whitehouse.

The Arkansas Highway Patrol advised the lead driver, Belinda Wright, to stop the convoy for the day. When that decision was made, a couple of rigs from Shreveport drove up this way to be able to slow roll back thru Shreveport in the morning and they’ll get it back on the road, cutting out a couple of stops and get on up to Washington, they never expected this kind of pushback. Right now those drivers and rigs are under the watchful eyes of the Miller County Sheriff’s Department and resting. 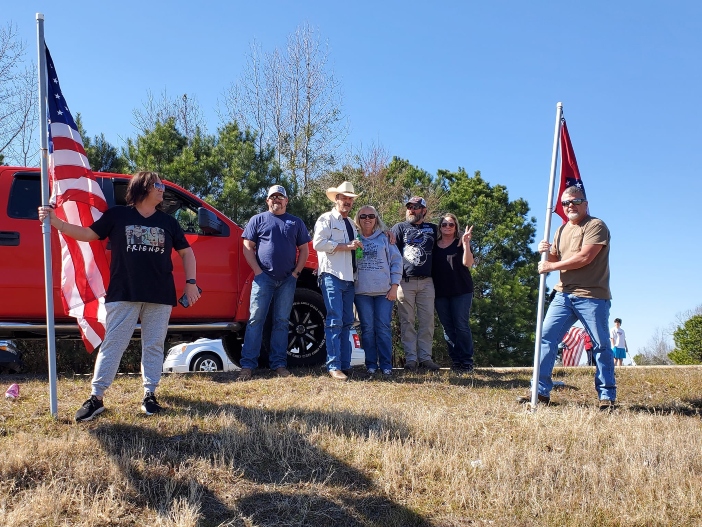 So, that is the biggest part of the opinion here. It’s just nuts to me that people would want to break this up, after a few years of burning cities and division why not let these people bunch up and be patriotic. If you don’t want to protect freedoms that were trampled and put people out of business and ruined lives, don’t but these folks are not burning, breaking, or really even inconveniencing anybody, especially on I-30. 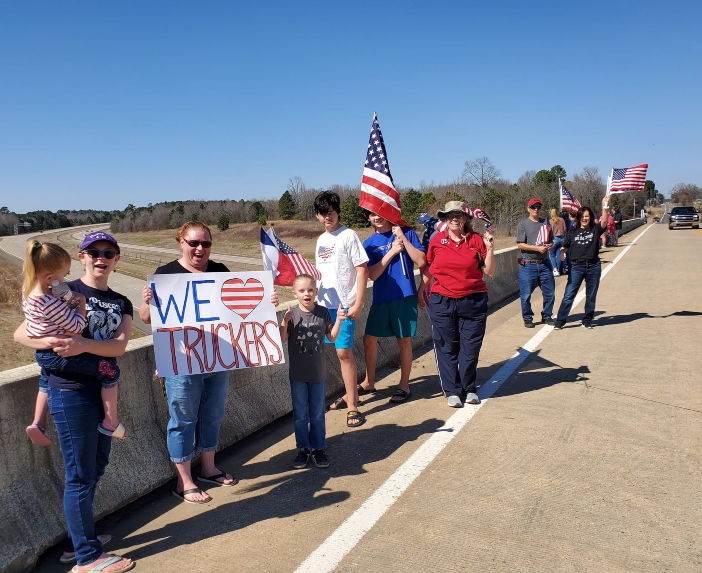 I guess I somehow hit one of those algorithm jackpots when we promoted this thing with our website on social media, it blew up. I’ve got what they used to call, carpetbaggers, messing with my life and emotions from it, as silly as it sounds. People from Idaho, Oregon, California are all trolling, calling business phones, advertisers, etc… just ridiculous. I’ve been called a white supremacist, Russian supporter, a misogynist, and worse of all, a “Trumper”. I’m not any of those things and if it weren’t for spellcheck I couldn’t even type misogynist correctly. So, look here, today I saw a bunch of people, white, black, Mexican, male, female, young, and old. Everybody was happy, laughing, and enjoying a beautiful day that was sunny and 75 degrees. I guess at the root is politics, but your American rights are yours to keep or not no matter who or even what party is in the Whitehouse. It’s a bi-partisan thing regardless of race, religion, or any of that other stuff, and Texarkana was a great example of being able to come together like that, sing a song, and pray together without craziness. It was awesome, even with only a handful of trucks. 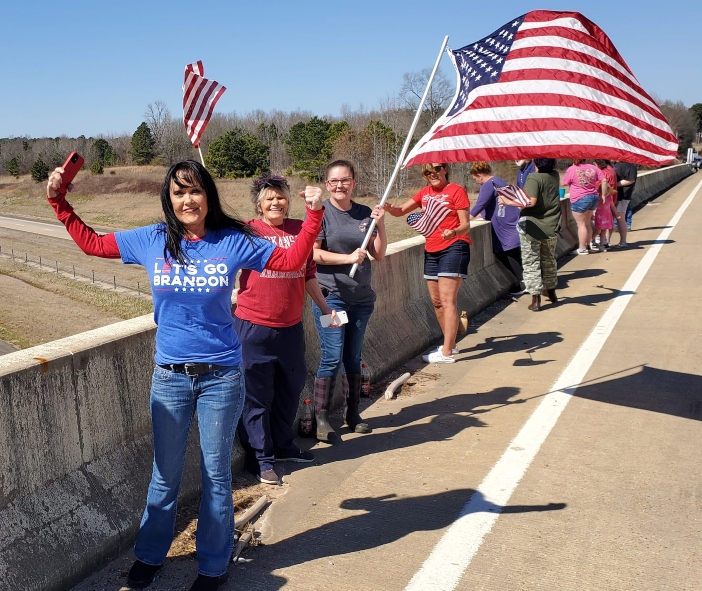 So, if we hit the algorithm thing again… share this! In Texarkana USA, you will find Americans. Democrat Americans, Republican Americans, black, white, baptist, catholic, atheist, etc… but all AMERICANS and we all have a pretty good time when we get together. Not just this event, but back when there were a few BLM rallies, Texarkana is a peaceful place, but we don’t burn our businesses, we don’t hate each other, we may not love one another all the time, but a lot of us really love it here.

Good luck to the truckers going forward to Shreveport in the morning, and any other group of like-minded people for whatever they may believe in and want to stand up for, we think Texarkana is a good place to do it, y’all come on!