A Texarkana Family was out on Caddo Lake enjoying a their fourth of July weekend when a tragic accident changed everything. While tubing on Caddo Lake, 8-year-old Lillie DePriest was seriously injured when the families boat crashed into a cypress tree.

8-year-old Lilli DePriest and her family were tubing on Caddo Lake. The boat was being piloted by the girl’s grandfather Lonnie Sullivan of Texarkana. Lillie’s mother Greta Duncan was a passenger, as was Greta’s husband Todd Duncan. Family friend 20-year-old Ashley Foster was riding in the front of the boat with Lilli, and grabbed Lilly and held onto her when she saw they were going to impact the tree and is credited with Lilli not being more severely injured. Greta’s daughters, 21-year-old Catherine Blundell and 20-year-old Emily Duncan were passengers on the tube being pulled by the boat. Reports from witnesses are that the duo on the tube were heading for a cypress tree and the driver of the boat made an evasive maneuver in an effort to keep the girls from striking a tree and while watching the girls on the tube, the boat struck a tree. Other boaters and campers on the lake witnessed the accident and transported the injured to hospitals and young Lilli was then airlifted to Children’s hospital in Dallas where she underwent surgery.

We asked Lilli’s sister Catherine, who was riding on the tube being pulled by the boat when the accident occurred, to tell us about Lilli and what she remembers from the accident, 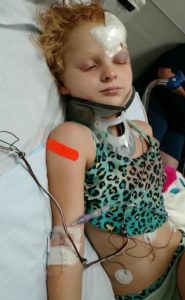 “Lilli has a fractured skull and just got of surgery and is icu at Children’s Hospital in Dallas and hoping to be home sometime this week. My grandpa is in icu at good shepherd medical center in Marshall. He has seven broken ribs and had a collapsed lung that they re-inflated. My mom was in the hospital for a while with what I believe was a concussion but she has been released and is staying with my sister. Other than that the rest of us okay. My sister Emily and I were on the tube in the water and there was a tree and they were trying to keep us from hitting it. We let go and I missed hitting the tree my head by an inch but I did hit my leg. I didn’t even notice it though cause my adrenaline was running crazy when I watched my family’s boat crash. Since they were watching my sister and I they didn’t realize that were heading straight for the bank. Ashley was upfront with Lilli and grabbed Lilli as soon as she saw what was going on and I truly believe she saved my sisters life. I think if she didn’t grab Lilli when she did Lilli wouldn’t be here. My brothers were on the jet skis and got my sister and I out of the water and over to the boat to help. We’re all just thankful it wasn’t near as bad as it could’ve been. We are extremely thankful for the people that stopped to help us and for everyone’s prayers”

Lilli’s grandfather, Lonnie Sullivan, is in ICU at Good Shepard Hospital in Marshal. He suffered multiple broken ribs and a collapsed lung among other injuries, but is in good condition considering the severity of the crash. Other passengers also received non-life threatening injuries and received treatment.

The accident is under investigation.