Texarkana Arkansas Firefighters responded to a fire this morning around 7:45 a.m. at Tri-State Iron & Metal at 1725 E. 9th Street.

It has been reported that there were no injuries or loss of equipment in the blaze. The fire is reported to have started near a pile of cardboard materials that were to be processed.

The Texarkana Arkansas Fire Department responded to recycling material on fire at Tri-State Iron and Metal at 0745 hours.  The call was upgraded from one unit to two units and a battalion chief based upon the large amount of smoke being seen from the one unit while responding to that location.  The first arriving unit stated that they observed a portion of a large pile of debris on fire when they arrived on scene.  At that time, all remaining TAFD units were dispatched to the scene.

The Texarkana Texas Fire Department was notified and placed on standby to respond if any other call came in on the Arkansas side.  Firefighting activities were delayed until the firefighters were able to lay a water supply line to the closest fire hydrant which was over 1300’ away on Pinehurst Street.  By this time the whole pile (approximately 100’x50’) was on fire.   Because of the need for a large amount of water and the loss of pressure from the long hose lay, Texarkana Water Utilities was contacted to increase pressure in the water distribution system.  The Miller County Volunteer Fire Department was contacted and asked to respond with Tanker trucks to supply even more water.  They sent units from Mandeville, Genoa, Boggy Creek, and Trinity.

The American Red Cross responded to assist with a rehab area for the firefighters.  The fire was under control around 1030 hours.  All units were placed back in service around 1215 hours. 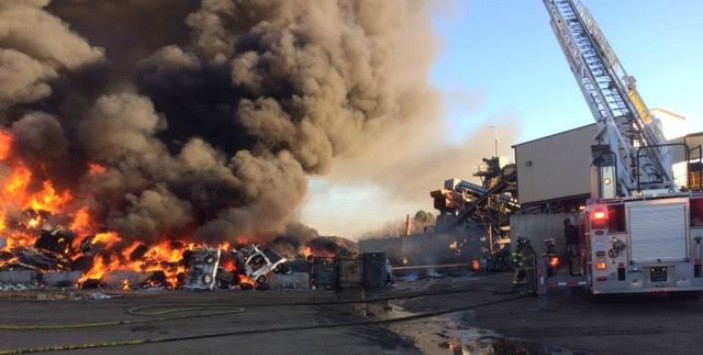