So, one winter storm is understandable, but when we get TWO winter storms in one week, sub-zero temperatures, 113 consecutive hours below freezing, two feet of snow, well, just what kind of weird weather can we expect this spring? Some experts believe, extremely severe weather is possible.

Anybody that has spent much time in the Ark-La-Tex knows that a severe thunderstorm can come on at anytime of the year.

We are in a La Nina pattern this year affecting currents in the Pacific Ocean, and some meteorologists believe we could have an extremely active spring severe weather season in our region because of it. For the same reasons, we went thru such crazy winter weather last week. Severe weather could be frequent and violent this spring, especially in April and May.

Extreme Meteorologist Reed Timmer, in an AccuWeather post, believes it will be an extremely active tornado season, similar to the Spring severe weather season of 2011. With La Nina keeping cooler waters in the Pacific and a lack of the warmer moist air over the Gulf of Mexico, March may not be too bad, but things could really get cranking in April and May. Timmer also believes that due to changing weather patterns, the most severe outbreaks will be a little further east than in years past. 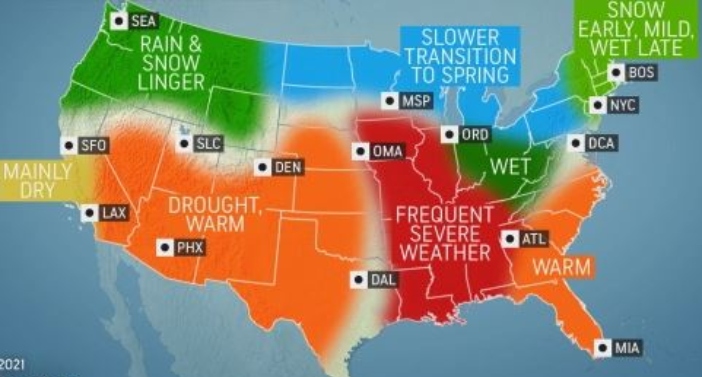 YouTube’s “Science Out There” channel produced a very extensive video forecast for the 2021 Storm Chasing Season in the US. For 2021, many storm chasers are expecting some very large tornado outbreaks this year, including the possibility of multiple EF5 tornadoes.