Millwood Lake’s Dam at Saratoga was completed in 1966 and to this day is one of the single most expensive construction projects in the southwest corner of Arkansas. When completed in 1966 the total cost was right at $140,000,000, a cost that we are all still paying in 2017!

In 2017 dollars that would be more than one billion dollars with the total cost of everything to complete the dam… with earthwork, the realignments of the GNA Railroad, and Highway 71. If you pay a SWEPCO or REA Electric bill, or a RDA or TWA water bill, you’re still paying for a small part of this dam and Millwood Lake. 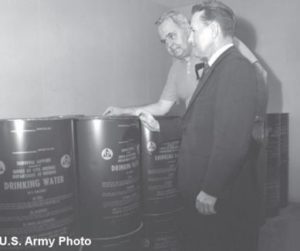 An interesting fact about the dam at Millwood is that since it was the height of the cold war at the time of construction, engineers included a Nuclear Fallout Shelter inside the dam. When the project was completed in 1966 the shelter was fully stocked in case of nuclear war.

Thankfully, for more than half a decade there has never been a reason to use the shelter inside the dam and over the years as survival supplies have expired they have been moved out of the shelter.

For more civil defense projects from the 60’s and 70’s check out civildefensemuseum.com.