Everybody that has spent a lot of years in Texarkana as heard people use “by the plane at Spring Lake Park” in giving directions as to where the birthday party is. All of my life I think the jet plane has been at the park but I never really knew the history of it, and not sure that I do now. So, I am hoping that by sharing what I do know, there will be a lot of people happy to tell me what I don’t know.

This is what I think I know… The plane is a T-33 Trainer Jet. That’s about it. I know it was not always fenced in like it is now and when my friends and I were kids we used to play on it. In researching Spring Lake Park for the 100 year anniversary of the park in 2016, I found that the area had been used as an airfield, back when the area was referred to mainly as the fairgrounds. There was a Horse Track in the park at one time also.

City of Texarkana Parks and Recreation Director Robby Robertson did some background work on the plane and provided this information. 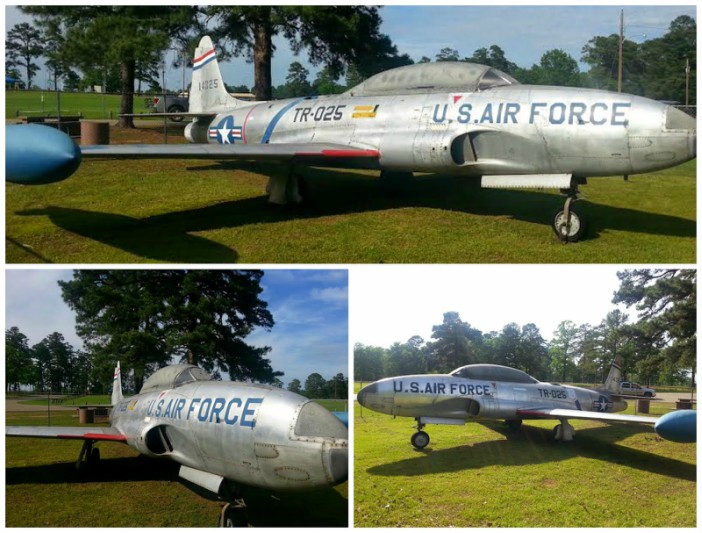 Texarkana Regional Airport is named for Harold Webb, Mr. Webb had a history with aviation that began long before Webb Field. I began looking for the history of “planes at Spring Lake Park” and here is something from Findagrave.com,

“Howard Webb, “Mr. Aviation” in Texarkana, recently retired as manager of the Texarkana Airport, 43 years after lifting his first airplane off the ground at Spring Lake Park. Webb, who has been manager of the airport over 40 years, has logged 18,000 hours flying time. To most people 18,000 hours doesn’t seem like much, but a person would have to fly 24 hours a day, seven days a week, for two years and 20 days to record that much time. Webb’s interest in airplanes came while he was in junior high school. “One day we heard that some airplanes landed outside the city between Tennessee Road and the Genoa Road. We played hookey and went out. I’ll never forget that day, there were four World War I “Jennies” there. After that I just couldn’t get airplanes off my mind”, he said. He took his first airplane ride in 1923 when a “barn stormer” came through town and was selling rides from a field on South State Line, across from the Sunshine Dairy. “Myself and a girl wnet up. It cost me $15 for seven minutes. I was 16 years old”, he said. In the spring of 1926 Webb made his first solo flight from Spring Lake Park. “I made my first solo flight off the grounds at the old race track on the fairgrounds. That was where all the planes landed at that time….

…At that time those who could fly, would land and take off at the fairgrounds. Webb was about the only one in the city who owned an airplane and could fly. In 1928 the airport was moved to its present location. It had two sod runways, one 3,500 long and the other 3,000 feet. Both were 500 feet wide. If a stranger wanted to land at night, lanterns were put on both sides of the runway. If one of the Texarkana boys wanted to set down in the dark, he just lined up and landed without lights. “I understand that Charles Lindbergh landed once at Spring Lake Park . I saw “Wrong Way” Corrigan land here shortley before he made his flight to Europe. He was flying the same aircraft he made the flight in”, Webb said.”

So, I was hoping to find some help to fill in the history gaps… Is the plane out there as a nod to that part of the park’s history, which is way after the 1920’s, or is it to symbolize something more specific? What do you know about the plane located at Spring Lake Park in Texarkana? Share your comments, thanks! 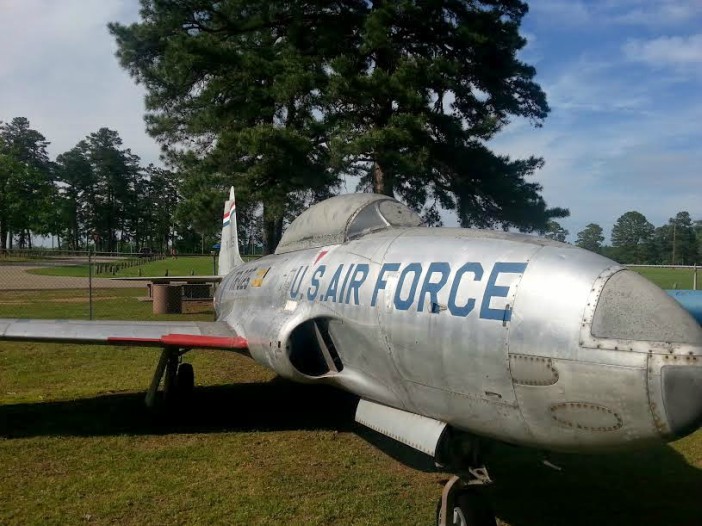