WWE Superstar John Cena put on a great show at the Four States Fairgrounds with WWE Monday Night event. Cena also made it a very special night for a local grandmother that takes her wrestling very seriously.

Dorothy Hill, 86, was in attendance Monday night at the Four States Fairgrounds Entertainment Center and a group of people from the fairgrounds and the community had something special planned for her. She is one of the biggest wrestling fans you will ever meet in your life. Her granddaughter, Alena Ritchie said this,

As long as I can remember she has watched and loved wrestling. I can remember being a little girl and counting out pennies to have money to go sit in nose bleed seats. I am almost 40 and she has watched it as long as I can ever remember. She has liked John Cena since he started wrestling. She doesn’t even answer her phone on the nights that wrestling is on.

After his bout Monday John stopped to meet Dorothy ringside. He took a couple of pics, gave her a very special token from the night, and even gave her a “sweaty hug” that Dorothy wouldn’t mind a few more of. What a group of local folks did to make this such a special night for Dorothy is a truly sweet story of a lot of caring people working hard to make sure a special woman for so many in her community of Blevins, AR. had such a special night. The best way to tell the story of Dorothy’s experience is to just share what Alena posted on Facebook about the night,

After winning he went around the ring throwing his arm bands to mostly small kids. He then walked straight to grandmas corner. He pointed at her, my knees buckled, grandma’s eyes got big as saucers and I started snapping away. She reached over and gave him the biggest hug. She later told me he was sweaty but she would take one of his sweaty hugs every day if she could. He pulled back looked her straight in her eyes and told her he had something for her he had been saving for her all day. He gave her his big sweat band that he wore on his left upper arm during the match. He put it on her arm, where I bet she has it and is sleeping with it on tonight. She started crying told him she loved him and thank you and he said I need you to do one thing for me. She said anything. He said would you please take a picture with me. She didn’t stop smiling the rest of the night. Huge thank you to Stacy Advocare McKee and Annette Nettles Mugno from Dierksen Hospice for all your help in making contacts and working so hard to make this happen for grandma. There were memories made that will never be forgotten, long after grandma is gone. Huge shout out to the fair grounds staff as they went above and beyond to treat her with kindness and do everything they could to arrange for him to acknowledge grandma. I was so overwhelmed with emotion that I was literally sobbing on our way back to our seats. She said well baby don’t cry I told her I couldn’t help it bc I truly had not seen her eyes shine so bright since 1988 before my grandpa died. Grandma said she had the best time ever, and there is not a thing in the world we could have ever done any better for her. 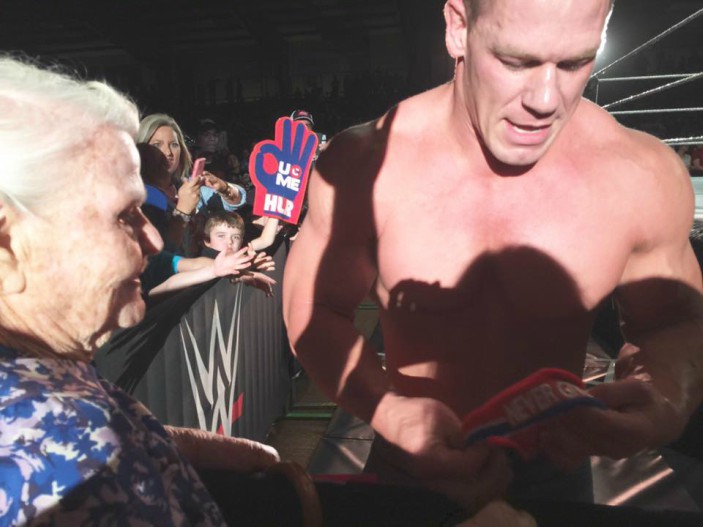 You know, when you are able to make someone’s dream come true it makes it all worthwhile!! Her smile was totally priceless. WWE went above and beyond to make it happen! 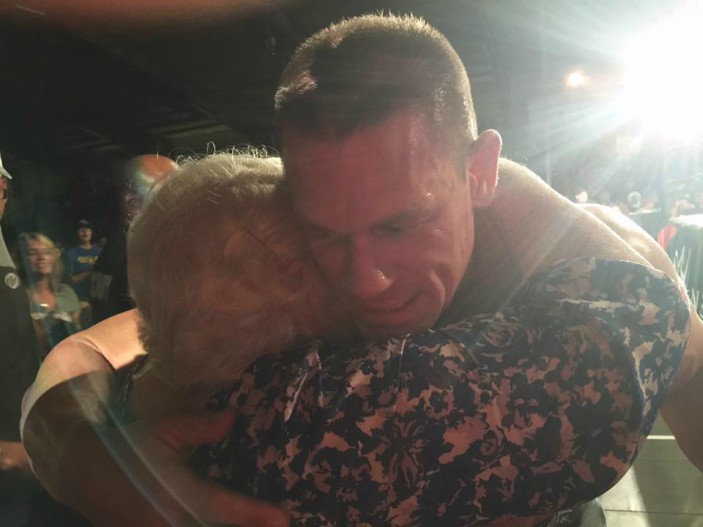